Understanding the heritage of our surroundings is something central to the Victoria Warehouse ethos. Trafford Park, the city’s most up-and-coming industrial suburb, has a rich history behind it; and much more going for it than just being the home of Manchester United’s Football Club. Here’s a condensed timeline of our home grounds; for those of you with a nose for history.

Before Trafford Park was ear-marked for industrial development, it was actually 1,183 acres of rural grasslands and meadows; including tall timber trees and roaming deer’s.

In 1761, due to the boom in industrial services and the widespread use of canals to ship goods across the North; the Bridgewater Canal was built along the southeast and southwest sides of Trafford Park. Along with the already existing River Irwell, the park became a kind of island, edged either side by waterways. In 1860, an 8 acre ornamental lake was dug into the North of the park.

In 1885 the commission of the Manchester Ship Canal was passed, despite Sir Humphrey de Trafford protesting that it would pollute the water to his residential home and force him to abandon the de Trafford’s ancestral estate. It was the 19th century equivalent of being told a motorway would soon run through your back yard!

After his father’s death, Sir Humphrey Francis de Trafford put the family estate up for sale in 1896 but it failed to reach anywhere near it’s reported value; and sold it for a fraction of its original price to Ernst Terah Hooley. Hooley was a business man who later portioned the entire site up and sold it to various buyers, beginning the industrialisation of the area. Trafford Hall was turned into a hotel to cater for these business men travelling to the area, who might have been considering potential investment in the land.

The first companies to make Trafford Park the base of their operations was Manchester Patent Fuel Company in 1898, followed by the Trafford Brick Company; the main distributor of the iconic red bricks that form most of Manchester’s architecture. More companies would soon follow including American firms, manufacturing a range of products from cotton to metal to electrical equipment.

When the cotton industry started to decline in the early 20th century, Trafford Park and the Manchester shipping canal helped keep the area afloat. As a result, Trafford Park was one of the main areas in the North that wasn’t forced into bankruptcy during the Great Depression.

During the First and Second World Wars, Trafford Park was a major supplier of materials; including the Rolls-Royce Merlin engines, which were used in Spitfires, Hurricane’s, Mosquito’s and the Lancaster. The area suffered from extensive bombing during the Christmas Blitz of 1940, including Trafford Hall, which was demolished shortly after.

In the 1960’s, commerce in the area started to decline; and by the 1980’s the workforce had fallen dramatically. In the 80’s various flagship programmes were launched to generate new interest in the area, including the development of Salford Quays. However, it wasn’t until 1998 when the Development Corporation began to attract a significant number of new enterprises to the area.

Now Trafford Park is once again on the rise, with more and more entrepreneurs seeing the limitless potential it’s in vast spatial dimensions. Victoria Warehouse is at the forefront of this forward looking push, to make Trafford Park once again the ultimate symbol of Manchester’s industrial and creative ambition. Take a look back at the history of Victoria Warehouse, and how we’ve become the venue of today. 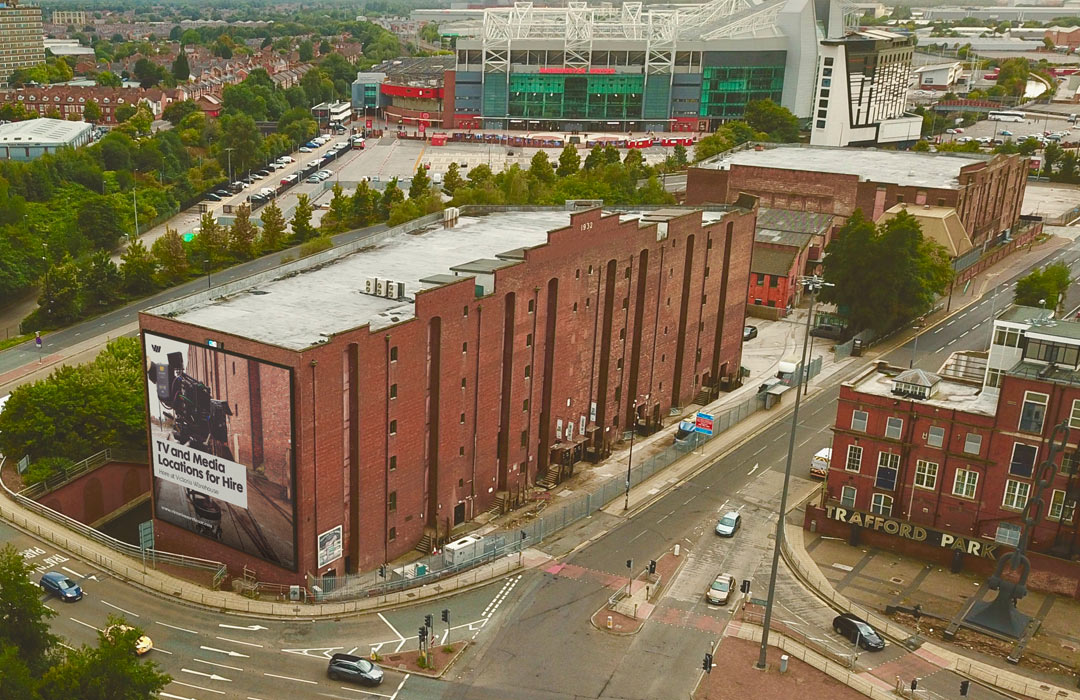